&nbsp While Cosmo appears on the Sonic anime TV, she actually makes a 3D appearance in the Earthbound games. She is revealed to be the mother of Princess Rosetta. It was revealed all along that Cosmo didn't really die during the blast. While making minor appearances in Earthbound 11: Adventure in Space communicating with Rosetta through her mind, she makes her actual and very major appearance in Sonic & Earthbound: Endless Adventures, where she appears in reality, in her child form. After the fight of the Dark Lasers, Chase creates a machine that brings Cosmo back to reality and reunites her with her child, Rosetta. Cosmo can go into her child form or adult form anytime she wants. After being brought back to reality, she lives on the Seedrian planet with her daughter. Cosmo has the same voice actress as her daughter, Rosetta. She is voiced by Amy Birnbaum. She makes a comeback as a playable character in Earthbound: Mega-Star Baseball. Cosmo wears her gown outfit in The Adventures of Paper Mario & Earthbound along with the other Seedrians.

Cosmo shares some similar traits with her daughter, Rosetta.

Cosmo is gentle and very kind. She is motherly, sweet, and a bit more active to fight than in Sonic X. After making her actual appearance in the video games of Earthbound instead of Sonic, she is very friendly and was trapped in the heart of Rosetta this whole time, revealing that she never did die. After the battle with the Dark Lasers, she is freed from her daughter's heart, comes back into reality herself, and reunites with her daughter, Rosetta, who's been dreaming that she'll one day reunite with her mother. Since then, she becomes a reocurring character in the Earthbound series in the sports and adventure games.

Most of the time she's in her child form, but is still the mother of Rosetta. She is the only person in Earthbound to not have beady eyes and nose (Though, Rosetta has beady eyes, but like Cosmo has no nose). She cares very deeply for Rosetta and is motherly and nice towards her daughter. She spents most of her time with her daughter making flower clowns, similar to Cream the Rabbit.

Unlike in the anime, Tails and Cosmo don't show any attractions for each other at all, while instead, Rosetta shares a relationship with Tails, though agrugly, on ossicasin terms they are good friends. Cosmo is a little bit more braver, and still has her hated of violence. In her adult form, her hair is longer, and her rose buds bloom.

Exactly like her daughter, she is sometimes shown to be a bit absent-minded, getting lost in her thoughts. She is shown to be quite athletic in the sports and is a go-getter. Cosmo cares for her daughter really deeply, and is nice and motherly towards her daughter and is proud of her. Like other heroes in the series, Cosmo dislikes Porky Minch for harming for both her daughter and her in severval ways. Cosmo is also headstrong, level-headed, kind-hearted, and determined.

Rosetta: She cares very deeply for her daughter. Cosmo has a very strong bond with her daughter and spents most of her time with her. They share very great chemistry in the sports.

Tails: Despite their romance in Sonic X, in the video game of Earthbound and Sonic, they don't share any love affections in each other, at all. Despite this, the two are good friends. Cosmo does call him "friend" often than Tails. Even though they are in love, they choose not to show it.

Emma Sparks: They are nice friends, due to Emma's good and kind heart. They share good chemistry in the sports.

Chase: They are very close friends. He had helped her come back into reality herself in Sonic & Earthbound: Endless Adventures. They share good chemistry in the sports.

Ness: They are good friends, being the friend of her daughter. They share very good chemistry in the sports.

Samantha: They are good friends. They share good chemistry in the sports.

Lucas: They are seen to be nice friends. They share good chemistry in the sports.

Cream the Rabbit: They are true friends just like in the anime. She is seen spenting time with her while with Emma, Marissa, and Charmy.

Amy Rose: She is good friends with Amy Rose.

In her adult form, she has bloomed razzle dazzle rose pink roses. Cosmo has very long hair of the color of lime green. Her body appearance is different from younger form. She has sided bangs on her cheeks. She is much more bigger than other seedrians

She seems more determine in her adult form. Cosmo is seems to have more power in her Adult self.

She shares lots of friendships, but has enemies:

Rosetta the Seedrian (has a great bond with her daughter; daughter)

Cosmo main outfit is mainly her flower dress, in both of her forms.

In her main sports' outfit, she wears a leafy skirt with a tanktop, with her buds blooming.

In her main sports outfit as an adult, it's different, being much longer and her buds a bit bigger.

Her outfits first appearance were in Earthbound Mega-Star Baseball. The player can switch to her adult form and a baseball game or stay in her child Form.

Her child form outfit has a long leaf skirt with a tanktop. She has a bloom tulip in her hair instead of her rose buds. She has leaves tied to her arms and wears slippers on her her feet.

Later on, Earthia turned into her true form, a giant tree. She gave birth to her last child, Cosmo. Eight years later, Cosmo was shown to have grown up into a gentle little girl. Her older sister, Galaxina, had a bond with her. She was loyal to her mother when Earthia turned into a giant tree using a fake Planet Egg, and was happy enough to do chores. However, Cosmo was absent-minded and always played her "pretend game" again. Cosmo was also annoyed at Galaxina for jokingly teasing her for playing her pretend game.

Later on, the Metarex (the male Seedrians who died on their planet) decided to get revenge on the female Seedrians for trying to destroy them. Cosmo was shocked by this and was separated from her sister, friends, and family. While Cosmo was running away, part of the ship that held Cosmo's friends and family got blown up, killing them. Cosmo, still alive, kept on running, scared and confused. One Metarex blasted through a wall as she ran down a hallway, and came at Cosmo. Cosmo was too scared to move away, and during that moment that Metarex said that she would be the perfect spy for the Metarex, making Cosmo's amulet shine, indicating that she was being controlled through her head. Nobody knows what happened happened after that, nor how Cosmo escapes. But the Metarex most likely let Cosmo go, and she made it to the escape pod which took her to Mobius (Sonic's world) and instigated the events of Sonic X's third season.

Even though Cosmo supposedly died at the end of Sonic X: Season 3, she actually didn't for some reason. She survived being hit by Super Sonic and Super Shadow and started living in a planet with her clan that somehow was still alive also.

Before she gave birth to Rosetta, Cosmo was the leader of her clan alongside Earthia and Galaxina. She was close friends with a Seedrian named Shadow Goddess. But, when a mysterious species called the Dark Lasers showed attacked their planet one day, their friendship was ruined. Cosmo proclaimed that it was now too dangerous to live on their planet, so she told all Seedrians to retreat from their planet so that they could move to a much safer home. But Shadow Goddess refused to leave and said she wanted to let the enemy win. Cosmo, shocked by her best friend's words, tried to reason with her, but Shadow Goddess refused to listen to Cosmo. Cosmo said they did not really have a choice. Shadow Goddess then flew into a deep rage.

Cosmo left with nearly all of her clan members in a huge spaceship called the Mothership. When Cosmo found out that they left Shadow Goddess behind, she tried to turn the ship around, but they were too far out of their galaxy, so they were forced to keep going. Cosmo was saddened by this, and wished that she never left her closest friend behind. However, it was later revealed Shadow Goddess decided to stay behind on purpose so she could stop the Dark Lasers herself. But Shadow Goddess thought about how Cosmo and the others wouldn't listen to her, which made her completely enraged just thinking about it. Suddenly, a boulder fell right on top of Shadow Goddess, sealing her fate. However, Shadow Goddess survived getting hit and was tranformed into a Dark Laser, becoming the leader of the Dark Lasers.

Later, Cosmo gave birth to a baby girl Seedrian and named her Rosetta. She held her in her arms. Earthia was pretty eager to see her granddaughter, as were the others. Rosetta smiled and said "Mommy" to Cosmo, which made Cosmo very happy and prompted her to give her daughter her name. Cosmo promised to Baby Rosetta that she'd always love and care for her forever. Baby Rosetta said "Rosetta loves Mommy." making all the Seedrians giggle, Cosmo included. Cosmo said she loved her too. Galaxina pointed out that Rosetta was a really cute baby. Suddenly, the Dark Lasers appeared, and told Cosmo to hand the baby over to them. Baby Rosetta started crying. Cosmo said to Baby Rosetta that "Mama's here, she'll protect her." When Cosmo refused to give up her daughter to them, the Dark Lasers zapped her with their lasers, while the Seedrians were shocked by Cosmo getting hurt. While Cosmo was being zapped by the lasers, she dropped a crying Rosetta. The Dark Lasers sucked Cosmo's body into Rosetta's heart. Before her body was sucked into her daughter's heart, Cosmo shouted, "ROSETTA!"

Cosmo was then trapped in Rosetta's heart all those years, while Rosetta was raised by a different group of Seedrians.

She is the Leader of the Seedrian Planet as her daughter is the princess.

Is Rosetta's Team, which has Rosetta, Cosmo, and it's still unknown if Galaxina or Earthia's going to be in the Team. Their team power is exploring Flowers causing damage to most enemies. They rival against Team Ryan and Team Power Houses. They team since Porky used plant killer on their planet and they go get revenge on him: 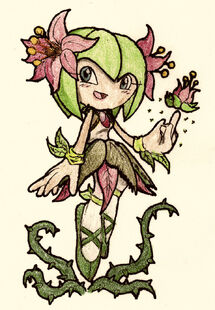 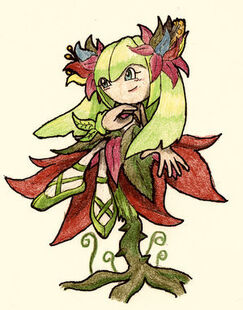 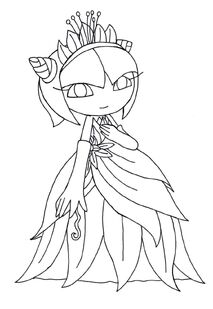 Line Art of her Main Dress Gown
Add a photo to this gallery
Retrieved from "https://cuteness.fandom.com/wiki/Cosmo_the_Seedrian?oldid=5436"
Community content is available under CC-BY-SA unless otherwise noted.